Blackmagic Design today announced Blackmagic Video Assist 3G which are lower cost models versions of the company’s portable monitoring and recording solutions. These new models feature built in scopes, upgraded batteries, 3G-SDI and HDMI for all SD and HD formats, all at a more affordable price.

All Video Assist models are dominated by a large touchscreen with all controls for recording, playback of clips, viewing scopes and setting focus assist features. Both 7″ models are large enough to include analog inputs for audio and two SD card slots so customers get continuous recording, with automatic recording to the second card. All models include a rear tally light, a front panel speaker for clip playback and a headphone jack. Video Assist uses Sony L-Series batteries, and with 2 battery slots, customers can change batteries without interrupting recording.

With large and bright 5 and 7″ touchscreens, Video Assist makes it incredibly easy to frame shots and accurately focus. The touchscreen displays critical information while users are shooting including the timecode, transport control, audio meters and a histogram for exposure. Customers can also customize the LCD to add or remove overlays such as current filename, focus peaking, zebra, false color, frame guides, 3D LUTs and more. 3D LUTs support allows monitoring shots with the desired color and look, plus customers can even „bake in” the LUT if customers want to record it into the file.

Blackmagic Video Assist is an ideal upgrade for cameras, as its bright display is bigger than the tiny displays found on consumer cameras, plus users are also adding professional focus assist features and better quality file formats. Video Assist is also a great solution for professional cameras because customers can use it to upgrade older broadcast cameras to modern file formats used on the latest editing software. Customers get support for all editing software as customers can record in Apple ProRes and Avid DNx. With both HDMI and SDI inputs customers can connect it to any consumer camera, broadcast camera or even DSLR cameras.

The innovative touchscreen LCD user interface provides incredible control. On screen, there are dedicated buttons for play, stop and record, plus a mini timeline for scrolling through their recordings. Customers can even swipe the image to jog. The LCD includes a heads up display of timecode, video standard, media status as well as audio meters. Scopes can be enabled via the touchscreen as well as focus and exposure assist. Plus customers can load and save 3D LUTs.

Video Assist features a wide range of video and audio connections such as multi-rate SDI for SD, HD on all models and Ultra HD on the 12G-SDI models. HDMI is included for HDMI cameras and monitoring to consumer televisions and video projectors. The 7″ model features Mini XLR inputs which are provided for audio input from microphones and external audio mixers. Video Assist even includes a 12V DC power connection and the 12G models include a locking power connector.

Video Assist records using standard open file formats so customers don’t have to waste time transcoding media. Files are compatible with all post production software so customers can work with the software of their choice, including DaVinci Resolve Studio. Recording works in industry standard 10-bit ProRes or DNx files in all formats and from all HDMI or SDI cameras, as well as 12-bit Blackmagic RAW on the 12G-SDI HDR models when connected to supported cameras. Best of all media files work on all operating systems.

Video Assist features scopes for accurate exposure on cameras and compliance to broadcast standards. That means it’s also a great portable waveform monitoring solution. The waveform display provides a traditional luminance (brightness) level view of the video inputs or the playback signal. The vectorscope allows customers to see the intensity of color at 100% SDI reference levels. Customers also get a RGB parade display which is ideal for color correction. Histogram shows the distribution of white to black detail in their images and highlights or shadows clipping. The built in scopes can even be overlaid on live video, or as a small picture in picture view at the top right of the scope. 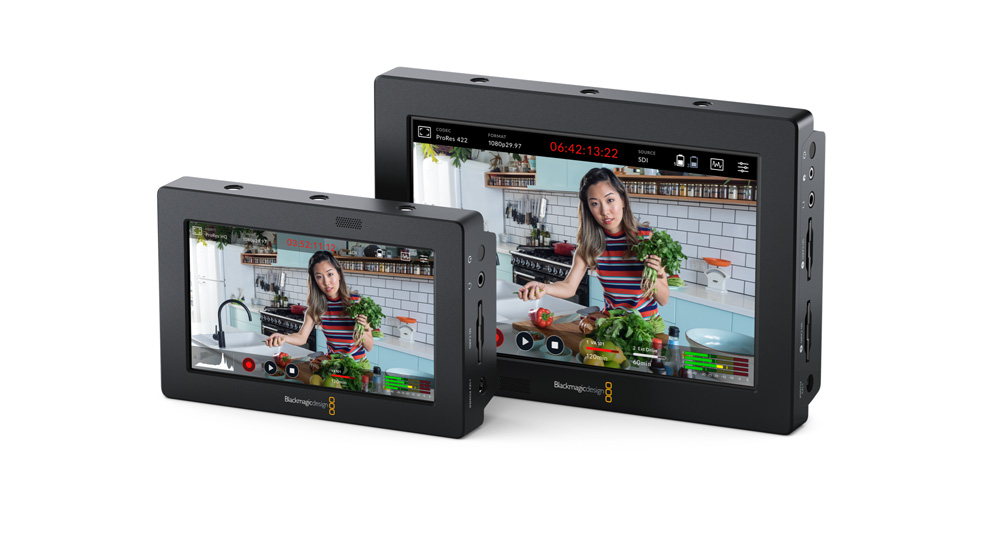 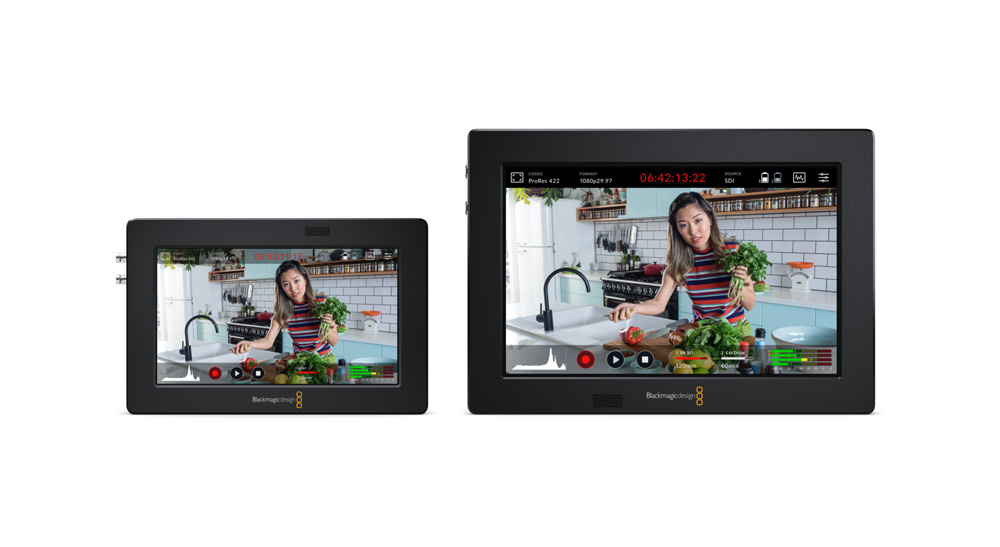 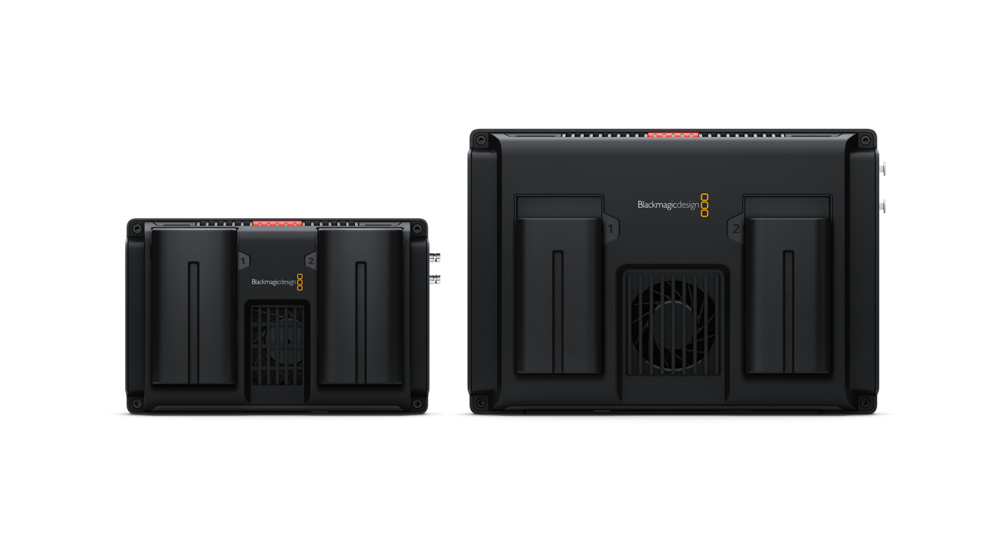 Some cameras can output logarithmic colorspace to preserve the dynamic range, which is great for later post production, however when these files are viewed on a monitor they can look flat and washed out. 3D LUTs solve this problem because they allow customers to apply a „look” to the monitor so customers get an idea of how the finished images will look like when editing. Video Assist works with industry standard 17 and 33 point 3D LUT files, or customers can work with the built in LUTs such as Extended Video, Film to Video and more.

The advanced digital slate and metadata features make it extremely fast to add metadata to any shot. Simply swipe left or right from the edge of the screen to bring up the digital slate. Customers can even select for take numbers to be automatically incremented when customers start and stop recording, so customers don’t have to enter them manually for each shot. Customers can also set reel numbers to increment each time customers format a card. All metadata is saved with the files and available in post production with software such as DaVinci Resolve. Then let the DaVinci Resolve sync bin in the cut page find and sync all their shots automatically. Simple scroll the timeline and select shots with a click of the mouse.

Blackmagic Video Assist includes a built in professional audio recorder that’s much better quality than the audio found in most cameras, eliminating the need to carry around extra audio equipment. When working in SDI formats, customers can record 2, 4, 8 or 16 channels of audio. For connecting microphones the 7″ models have 2 XLR analog audio inputs with phantom power and high definition audio sample rates of 192 kHz at 16 and 24 bit per sample. The audio meters can even be changed between VU or PPM ballistics.

Multiple languages are fully supported so customers don’t need to learn another language to use it. Support is included for English, Chinese, Japanese, Korean, Spanish, German, French, Russian, Italian, Portuguese and Turkish.

The files from Blackmagic Video Assist are common and are compatible with all operating systems or in most video software. Media can be formatted using ExFAT or HFS+ so customers can easily access the media on computers and access the files like regular disks. DaVinci Resolve is perfect for using with Video Assist as it features editing, color correction, audio post production and visual effects all in one software application.

„The Blackmagic Video Assist 12G HDR monitors have been received very well by our customers because they have so many features.” said Grant Petty, Blackmagic Design CEO. „However many customers don’t need HDR screens and Ultra HD, so we have produced new HD models that include most of the powerful features at a much lower price. Plus these new models still include built in scopes, 3D LUTS, powerful focus assist tools, presets, upgraded L-Series batteries, record tally light, built in speakers and more!”