The new Blackmagic Micro Converter 3G models are incredibly tiny broadcast video converters that let customers connect between consumer HDMI and professional SDI equipment. The rugged and miniaturized design makes them small enough to be used anywhere. Customers get professional 3G‑SDI connections for working with all SD and HD formats up to 1080p60. Micro Converters use USB for power, so they can be powered directly from televisions or laptop computers. Customers can even purchase them without power supplies if they are not needed. Only Blackmagic Micro Converters feature custom designed electronics that conform to current global broadcast specifications, and can be updated to new standards in the future.

Because they are extremely high quality, customers can trust them for all kinds of broadcast, live production and on set use. Use them for turning any computer display, television or video projector into high quality color calibrated broadcast monitoring. They’re also perfect for converting the HDMI outputs of computers and consumer video cameras to high end SDI equipment. Imagine using a slide show running on a computer for high end broadcast quality titles in live production. Customers could even use them for extending long HDMI distances using SDI.

Unlike cheap converters, Blackmagic Micro Converters include the highest quality signal processing and deep bit depth video pipeline. Micro Converters have been engineered with precision electronics so customers get very low SDI jitter, allowing customers to extend SDI cables over long distances. That’s vital for live production where equipment such as cameras can be a long distance from switchers. Blackmagic Micro Converters work with both 8 and 10‑bit video formats, in RGB or YUV, and in all SD and HD formats up to 1080p60. They even support 1080p24, 1080p47.95 and 1080p48 film rates. Plus customers get fully embedded audio and timecode support. 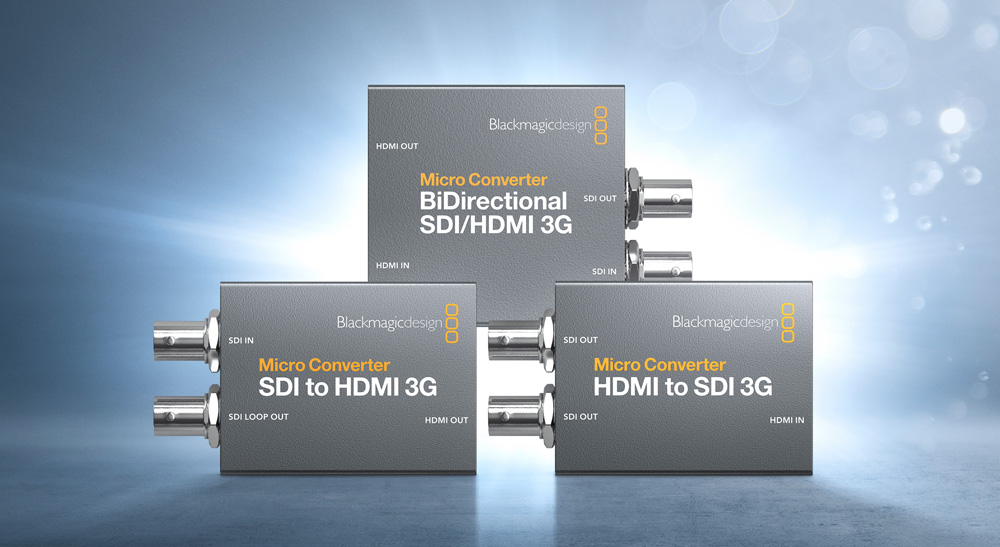 Customers can also change settings and update the converter software with the free converter utility that can be downloaded from the Blackmagic Design web site. This software connects to the USB connection on the Micro Converters and runs on both Mac and Windows computers. Customers can use the utility to change the converter name, which can be useful for identifying which converter is used for which task. When using the bidirectional converter, customers can even set the camera number, so the converter knows when it’s being controlled from a live production switcher. Customers can also select between level A and level B on the 3G-SDI video output.

The Micro Converter SDI to HDMI 3G model even includes a 3D LUT for color accurate monitoring. Customers can apply custom looks, color and gamma changes in real time for on set monitoring. LUTs can also be applied to the 3G‑SDI loop output, allowing customers to use the converter as a 3D LUT processor. Customers can also use 3D LUTs to get a color calibrated grading monitor using a low cost computer monitor or TV. Customers can even use the DaVinci Resolve primary color corrector to create amazing looks and then save them as custom 3D LUTs. Because DaVinci Resolve can be downloaded free, it costs nothing to start creating a world of custom 3D LUTs for monitoring. Imagine reproducing old film stocks.

The new Micro Converter BiDirectional SDI/HDMI 3G model even supports camera control so customers can use a Blackmagic Pocket Cinema Camera with an ATEM SDI switcher. ATEM switchers send camera control over SDI, and the converter can translate this to HDMI for the camera. Just connect SDI from the converter out to the switcher input, the switcher program out to the converter input, and then the HDMI converter input connects to the Pocket Cinema Camera. Now add a camera number in the converter utility and users will get control of the camera color corrector, tally and even remote recording. It even works in reverse and customers can connect and control an SDI camera from an HDMI switcher such as ATEM Mini.

The new Micro Converter 3G models use a new Blackmagic Design custom hardware design so they’re more advanced to better support the technical features critical to high end broadcast workflows. These features include support for HDMI and SDI timecode conversion. Customers even get full support for timecode in both standard definition and high definition video formats. This means if customers have any HDMI device that supports timecode, customers can convert it to SDI and get that timecode into larger broadcast systems. 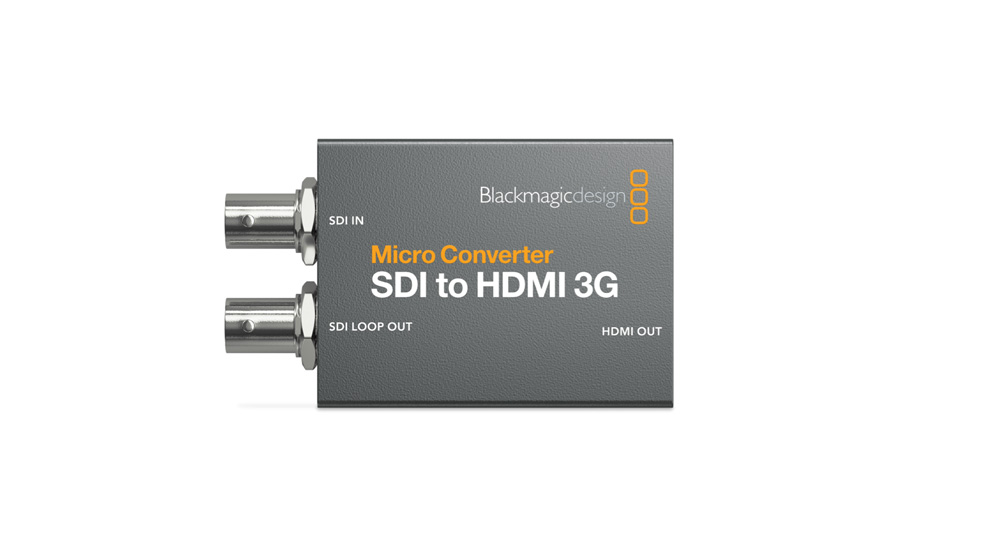 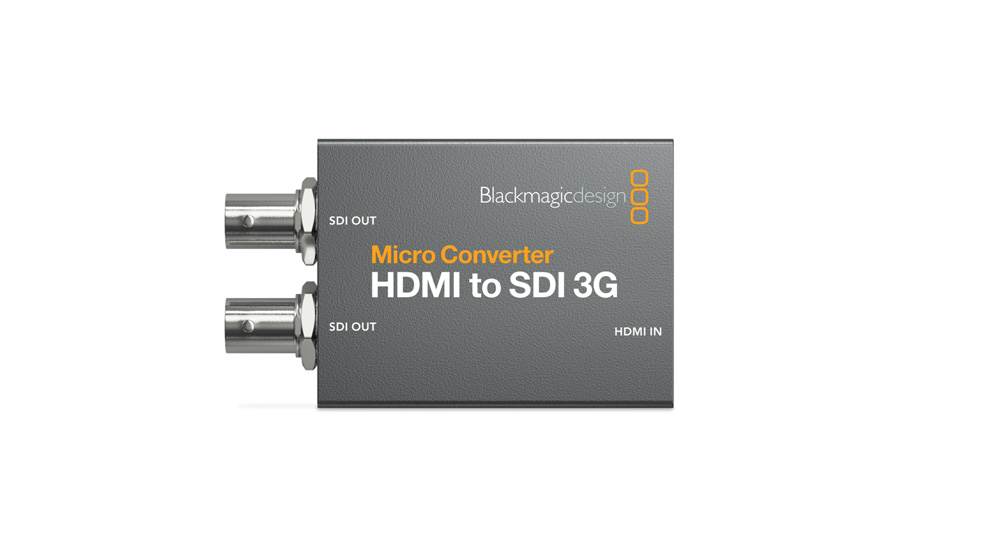 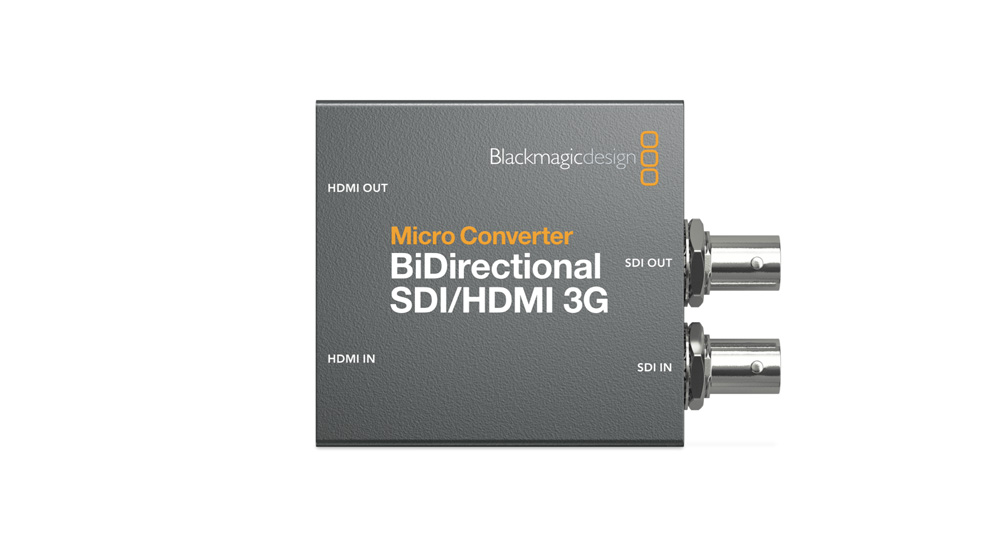 Blackmagic Micro Converters include built in SDI re‑clocking on the 3G‑SDI output. The SDI re‑clocking will regenerate the SDI video, reduce SDI jitter and improve SDI eye pattern before the converter sends the signal to other equipment. This allows longer cable lengths because even degraded SDI signals can still be used. Other converters often leave out important features such as re-clocking so are not reliable for broadcast use. Blackmagic Micro Converters also fully comply with SMPTE 259M, SMPTE 292M, SMPTE 296M, SMPTE 424M, SMPTE 425M level A and B, broadcast standards.